"The End" is often the objective when authors write. Before reaching this lofty goal, writers will go through days, weeks, or possibly years of ups and downs, searching high and low for inspiration, and head-banging the keyboard. They will endure 3 a.m. wake up calls from their muse—why on Earth can't she have regular business hours anyway?—or said muse falling down on the job as a no-show.


Once those six letters are finally typed, authors expel a deep breath and adrenaline rushes through their system. Elation follows close on its heels, at least, that's how it is for me. An entire manuscript is finished. Break out the champagne, let loose the balloon drop, and fire those confetti cannons. They’re done.

When the celebration is over, the real work begins. Editing. 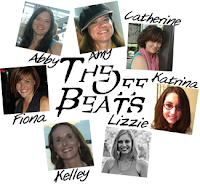 As many of you know, I’m a member of The Off Beats, a critique group comprised of myself and six other authors. Four of The Off Beats are agented and two are already published, so we feel our little group is on its way to greatness. Keep an eye on your local bookstore, because someday there will be an Off Beats end-cap featuring books written by all of us. At least, that’s our dream.

However, before we get there, we have to share our work, subjecting our precious babies, our manuscripts, to the proverbial red pen. There are two sides to every poker chip, and I always find it easiest to be on the critiquing side. It’s so much less stressful and humbling.

On almost every manuscript I've critiqued, there are a few things I’m constantly making notes about. Over the next few weeks, I plan to go into more depth for each of the following areas, but today I’ll give you a general list of what I see most.

Filters come between the reader and the point of view character’s experience. Words such as looked, felt, saw, smelled, and realized are filters. It’s fine to use them as the words flow during that first draft, but slash as many as possible to bring readers closer to the action.

Unnecessary words are dead weight. Remove words such as that, just, could, and would. This a short list and there are many others. These words are fillers, but can be removed and not be missed in the least.

There’s more than one way to do almost anything. Same goes for ways to convey actions, emotions, and ideas. When the same word is used multiple times, the text sloughs into boring territory. The English language is filled with synonyms. Using them keeps work fresh and exciting.

Keeping readers engaged is imperative. To do this, authors must vary their sentence structure. Otherwise, they risk the audience experiencing something akin to listening to a teacher drone on in monotone-monologue-mode. Who wants to go through that?

Pacing suffers when authors tell readers something they already know time and time again. Readers remember what they’ve already learned in previous passages. They’ll either put the book down or start skimming to get to new material. Give them new information to keep the story moving along.

Ex1. Shelly was mad.
or
Ex2. Shelly slammed her fist on the table and let out a growl as she jumped from her seat, knocking it over.

The first example is telling; conversely, the second shows the reader not just that Shelly was mad, but how her anger manifested (please note, example two did not even use the word angry or mad).

Writers tend to love words and generally have large vocabularies, which is a good thing. However, if characters are to come across as realistic and believable, the words they use need to fit them. If the point of view character is a teen girl, she’s not going to use the same vocabulary as a forty-year-old man to describe her world and thoughts, even if they're experiencing similar things. This counts not only in dialogue, but surrounding text as well.

Never say in three words what you can say in two, or better yet, one.

Ex1. I took the knocker on the door in hand and lifted it,  and then I banged it three times to let them know I had arrived.
(26 words)

Ex2. I rapped three times with the doorknocker to let them know I arrived.
(13 words)

Ex3. Using the doorknocker, I announced my arrival.
(7 words)

See what I mean?

This one depends on the point of view from which the book is written. I’m not referring to omniscient POV. Instead, I’m talking about first or third person POV, which means it’s written from one of the characters’ POV.

Let’s say we’re reading from Becky’s POV. Becky isn’t going to know anything the other characters are thinking, seeing, feeling, or hearing. She can’t be certain how events affect another character, unless she’s psychic or a mind reader. Assuming she’s neither, she can only speculate about another character’s motivations, thoughts, feelings, or reactions. This is true, even if what another character is thinking seems obvious.

Never tell a reader what they already know or will assume. It bogs down the pace and insults the intelligence of the audience. Authors do not have to tell every step of every action. If a character goes somewhere in a car, the reader will assume certain things about it the character’s actions. They will automatically imagine the character pulls the door handle, opens the door, and closes it upon exit. Unless there is something special about these actions, there’s no need to mention them.

Also, falling under this category is stating the obvious and movement words which imply the direction. Take a look at the following sentence, and yes, it is an over-the-top example, solely for demonstration purposes.

Once inside the room, I crossed over to settle into the bed and sat down, and then I lay down and lifted my arm up over her waist to pull her toward me. (31 words)


[Ex1]Obviously they went inside a room, if it wasn’t a room, that would be worth adding. i.e. "Once inside the warehouse...", but even then the reader probably already knows the character is at a warehouse. J

[Ex2]When the audience reads that the character settles into bed, they will automatically assume they must have crossed the room to the bed.

[Ex3]By using the words settle into bed, you’ve eliminated the need for "sat down and then I lay down”, all of this is conveyed by settle.

[Ex4]The reader will assume the character has lifted their arm and that he put his arm over her waist if he’s going to be able to pull her toward him. How else would he do it? If he does employ a different method than one would expect, then it’s worth showing the reader. (i.e. if he grasped the back of her nightgown and dragged her to him in that manner.)

Now it reads:
Once inside, I settled into bed and pulled her toward me. (11 words and could probably be pared down even more.)

A few more examples of movement words which imply the direction:

As a disclaimer, you should know I’m not impervious to mistakes. I’ve made every one of these and then some. In all honesty, sometimes rules need to be broken. However, I do comb through my manuscripts, weeding out my blunders, during the first grueling round of edits, prior to sending them out to my CPs and beta readers. Do I manage to eradicate them? Hell, no, but at least I’ve reduced the number of times my CPs must point them out.

What are things you do to make your manuscripts stronger and tighter? Share your wisdom in the comments section and don't forget to stop back in next week to explorer FILTERS in more detail.

Ten Writing Tightener Series will include

If you 'follow by email', the post will be sent to your inbox upon publication (check the side bar on the upper right). Please become a member of this blog, I would greatly appreciate it. Thank you.

Thanks for visiting and commenting! I hope you've enjoyed the blog.

Who Is This Woman?

My books on Goodreads

BREATHE (Episode 1 of The Devastation Series)

BREAK (Episode 2 of The Devastation Series)